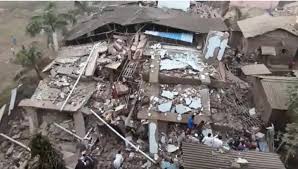 Two persons were reported dead and 16 others feared trapped on Tuesday after a residential building collapsed in Western India, the Police said.

Police officer Shashikiran Kashid, said two persens died in the accident and the seven injured were rescued by the National Disaster Response.

More than 70 people were initially feared trapped, but Raigad Police Chief, Anil Paraskar, said about 60 inhabitants managed to flee just as the building began to crumble.

The officials however denied media reports that occupants of the house were rescued.

Meanwhile, the Police revised the figures of 22 injured it released on Monday night.

Police suspect the building had structural defects, as criminal case was filed against the builder.

Prime Minister Narendra Modi expressed grief about the accident and instructed local authorities to provide all possible assistance to the victims.

Building collapses are common in India, usually due to shoddy construction, substandard materials and disregard to regulations.

It has been reported that many of these accidents occur during the monsoon season.