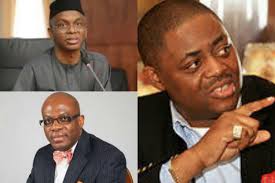 The NBA had withdrawn an earlier invitation to El-Rufai after thousands of lawyers signed to have the invitation withdrawn over massive killings in Southern Kaduna, a Christian dominated area.

The Kaduna state branch of the Muslim Lawyers Association of Nigeria (MULAN) announced its withdrawal from the annual general conference of the NBA over the dis-invitation of El-Rufai, as one of the Speakers at the conference.

They felt that El-Rufai was singled out for persecution because he is a Muslim and called for the ban of former President Olusegun Obasanjo and Governor Nyesom Wike of Rivers State from speaking at the conference since they have similar cases which led to El-Rufai’s dis-invitation.

But Fani-Kayode wondered how lawyers who called themselves learned could degenerate to such extent of bringing religion to simply withdrawal of invitation to a governor.

“Can someone please explain to me how the withdrawal of an invitation to speak at an event held by an association of learned men & seasoned professionals ends up degenerating into a Christian versus Muslim matter?

“This is not only shameful but is also a grave indictment on us all,” he tweeted.