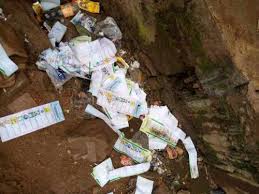 Local government election in Ondo State on Saturday (today), 22 August, was marred by violence, irregularities and low turnout of voters.

The council election was also characterised by a shortage of voting and inadequate electoral materials.

The poll conducted by the Ondo State Independent Electoral Commission held in all 18 local government areas of the state.

There were reports of violence and highjacking of ballot boxes in Akure North Local Government Area of the state.

A total of 10 political parties participated in the exercise.

The Zenith Labour Party and Peoples Democratic Party boycotted the poll on the grounds that the electoral body might not be transparent.

It was also observed that many residents of the state refused to come out and participate in the exercise.

In many polling units visited in Akure, Owo, Idanre, Akoko and Ese Odo, only security men and ad-hoc staff of ODIEC were seen in the centres with few people on the queue to exercise their franchise.

In Akoko Local Government Area of the state, the few electorates, who came out decried the shortage of voting materials.

Speaking shortly after his vote, Speaker of the state’s House of Assembly, Mr Bamidele Oleyelogun, explained that the local government election was a “mock test” for the October governorship election.

Oleyelogun, who voted at his Isarun Unit 13, Ward 10, said the performance of the All Progressives Congress in the election would determine the chances of the party during the governorship poll.

Governor Rotimi Akeredolu on his part described the election as transparent and fair.

The governor, who voted at his Ijebu Unit 06, Ward 05 in Owo, said the election would serve as a template for the October governorship election.

Akeredolu, however, admitted that ODIEC failed in its responsibility to supply enough voting materials for the smooth conduct of the exercise in some polling units.

Prof Yomi Dimakin, ODIEC Chairman, said the commission created a level playing ground for all political parties that participated in the election and did not favor any group.