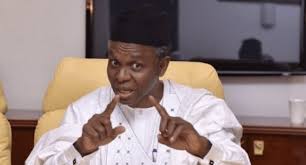 Kaduna State Governor, Nasir El-Rufai, on Saturday told the leadership of the Nigerian Bar Association, NBA for withdrawing the invitation extended to him to participate at the association’s 60th annual general conference.

The NBA had listed the governor as one of the keynote speakers at the conference.

However, after some lawyers and groups enraged by Kaduna State government’s alleged poor handling of violence in the southern part of the state protested El-Rufai’s invitation to the conference, the association withdrew the invitation on Thursday night.

However, in a strongly worded letter signed by his lawyer, U.A. Mustapha (SAN) and addressed to the NBA President, Paul Usoro, the governor expressed disappointment that the association withdrew the invitation based on an unverified petition by a group, “Open Law Initiative” without giving him the benefit to be heard.

He also described as unacceptable that the NBA constituted itself into an accuser and a judge in its own matter and denied him fair hearing before taking the decision to withdraw his invitation.

‘It is utterly scandalous to say the least. My response is principally dictated by the strange circumstance leading to and surrounding the said withdrawal of the invitation which is based on one-sided allegations contained in a petition by the so-called Open Law Initiative which was believed and acted upon by the Annual General Conference Planning Committee of the Nigerian Bar Association without any reference to Governor El-Rufai.

“The decision taken by the NBA to withdraw their invitation to Governor El-Rufai on the basis of the wild and unsubstantiated allegations contained in the Open Bar Initiative Petition without any reference to the Governor is not only a naked affront on the rule of law but also a contradiction of the NBA’s motto which held itself out as the custodian, defender and guardian Angel of the rule of law in Nigeria.

“The implications of this grievous decision by the NBA demonstrate a total disregard for the basic constitutional provision of fair hearing which is the foundation and bedrock of the rule of law designed for the safeguard of the fundamental right and freedom in any civilised and democratic society. It, therefore, beats all imagination that an elitist professional body like the NBA could take a decision that negates the very essence of this fundamental constitutional provision, no matter how tempting or appealing the reason may be.

“Going further, it is also instructive to note that the NBA sat down, constituted itself unto a court and adjudged Governor El-Rufai guilty of all the allegations contained in the said Petition without hearing a word from the Governor and thereafter proceeded to apply the sanction requested by the Petitioners which is a withdrawal of the invitation. What a ‘court?’ Can this be called justice and fairness? Is this exemplary?

“It would certainly not be out of place to insinuate political motives behind this unfortunate decision as the NBA as a professional body which is supposed to be in the forefront of the protection and promotion of the rule of law in Nigeria should know better than this. After all, members of the NBA Executive and Annual Conference Planning Committee as constituted can be counted among the brightest legal minds in Nigeria.”