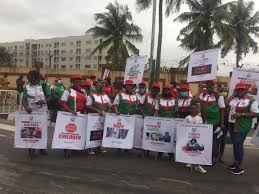 Members of the Trade Union Congress, TUC, women wing, who were Commission on Thursday staged a peaceful protest against incessant rape to the Lagos State House of Assembly.

The protesters, who were women, numbering about 50, were led by the Chairperson of the Group, Mrs Oluyemisi Oyejide.

The protesters chanted solidarity songs and displayed placards with inscriptions such as: “Women are not sex toys”, ”Any gender can be a victim of rape.”

Others inscription include: “Say no to rape,” “Start raising responsible children,” “No to rape is a collective responsibility,” and “Future mothers deserve protection”.

Oyejide explained that the group was at the assembly to appeal to the Speaker of the House, Mudashiru Obasa, to ensure the assembly provided a stiffer penalty for rape cases.

“We want the assembly to put in place penalties to deal with rapists because justice delayed is justice denied.

“Most times, rapists go scot-free and others will go into it. I learnt that the sex offenders law is in Lagos state so they should try and merge it with that of the Federal Government.

“If there is a database for offenders, those who commit the offence in one state will not be able to go to another state to commit another offence,” she said.

Oyejide said there was a campaign for the programme which was, ‘Say No To Rape And Sexual Violence,’ adding that they had done a programme on the issue at the Adeyemi Bero Hall in Alausa.

She noted that the Inspector General of Police had said that about 730 rape cases were recorded nationally between January and May this year.

Oyejide said they felt it was the lockdown caused by COVID-19 that led to the increase then, but they had discovered that rape cases kept increasing after the lockdown had been eased.

She appealed to the government that whenever a rape case was reported, the alleged rapist should be prosecuted immediately to serve as a deterrent to others.

Oyejide explained that when people see a rapist go free, they would feel there was no big deal about it, but when a rapist is punished; others would be careful.

The chairperson emphasised that by now, there should be over 1,000 rape cases in the country, which she said was on the high side now.

She said: “We want to encourage people to come out to talk about rape; especially the victims, it is an emotional thing.

“There is already a bill sponsored by Sen. Oluremi Tinubu and we want it to the passed and signed into law by the President.

“We should have a national criminal database so that a criminal will not go to another state to commit another crime. If they treat the cases urgently, people will stop committing rape.”

Responding, Mr Victor Akande, representing Ojo I, who addressed the protesters on behalf of the speaker, said he would take the matter back to the speaker.

Akande told the protesters that the speaker is someone that listens and protects the rights of women.

“We want to thank you for coming to the state house of assembly and for the way you have conducted yourselves and what you are doing is to protect our mothers and daughters.

“We have a law that we wanted to amend and one of our members made a suggestion on it and Mr Gbolahan Yishawu, representing Eti-Osa II, also had come up with a bill on rape.

“I promise you that within a short period of time, we will ensure that the rape law is amended to capture every facet that has to do with rape.

“We will soon have a database so that we can liaise with other states on rape cases,” he said.

Other lawmakers that addressed the protesters were Olayiwola Olawale (Mushin II) and Nurein Akinsanya (Mushin I).