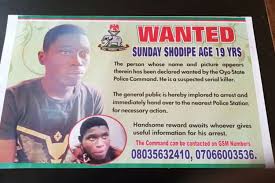 The Police Command in Oyo State, South West Nigeria has announced N500,000 bounty for useful information that can lead to the re-arrest of Sunday Shodipe.

Shodipe, 19, allegedly linked to the murder of 18-year-old Barakat Bello, 29-year-old Azeezat Shomuyiwa, and three others in Akinyele LGA of Ibadan was arrested but escaped from police custody on August 11.

Oyo state Commissioner of Police, Nwachuckwu Enwonwu, announced the bounty in a statement issued in Ibadan on Thursday by the command’s spokesman, Superintendent of Police, Olugbenga Fadeyi.

The commissioner urged the general public to join hands with the police to re-arrest the alleged suspect to the nearest police station for necessary action.