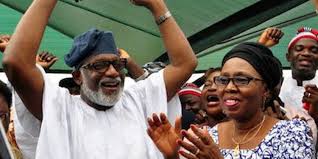 As way of helping parents in the state, Ondo State Governor Oluwarotimi Akeredolu on Thursday announced that he would reduce fees being paid at state-owned tertiary institutions.

Akeredolu disclosed this in Akure, the state capital during a courtesy visit by the national executive members of the National Association of Nigerian Students, NANS.

He explained that he had commenced an investigation into fees being paid in other state-owned institutions to effect a reduction in the state.

“At my last meeting with you, I said I would find out where they are paying less than what we charge here.

“What we found out was that for those newly admitted, we still charge the lowest tuition but for the second year and all, we have state-owned institutions that charge lesser than us.

“It’s not a matter for political gains. I know by the time we announce it, they will turn it to a political issue,” the governor said.

According to him, students are so important that it will take every stakeholder to sit down to discuss the tuition.
NAN