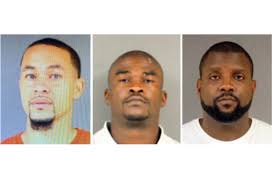 Three Jackson, Mississippi, police officers have been indicted on second-degree murder charges for the fatal beating of a Black man in January 2019.

Officers Desmond Barney, Lincoln Lampley and Anthony Fox have all been charged after a grand jury accused them of “eminently dangerous” acts, according to an indictment obtained by WLBT.

Jackson police were canvassing a neighborhood after the fatal shooting of a pastor in a botched robbery hours earlier when they came across 61-year-old George Robinson, sitting in his car.

The three Black officers, who claim they saw Robinson dealing drugs, pulled him out of the vehicle for “noncompliance,” handcuffed him and beat him, including body-slamming him headfirst into pavement and hitting and kicking him in the head and chest, according to the indictment.

Robinson was released from custody at the scene about an hour later and returned to his motel room.

That evening, he was hospitalised.

He died two days later and a coroner ruled his death homicide by blunt force trauma.

“We are pleased the Jackson Police Department officers involved in his death have finally been charged with murder,” Robinson’s family said in a statement to WLBT.

“For us, the charges prove that George’s life mattered and no one deserves to die the way he did.

“We are grateful that the District Attorney has taken this action. We have cooperated with the investigation in every way and will continue to do so until we finally get justice for our beloved George,” the family added.

Barney, Lampley, and Fox turned themselves in and have all posted bail, according to WLBT.

Lampley still works for the Jackson Police Department, but Barney and Fox both moved to the local police station in Clinton.

“Our administration is committed to ensuring that Jacksonians have an accountable police department.

“As part of our accountability process, the City of Jackson has implemented a policy to turn all cases involving officer involved deaths over to the DA for review by a grand jury,” Mayor Chokwe A. Lumumba said.

“In the full spirit of transparency, the administration will continue to monitor the situation and provide information to the public throughout each phase.

“We ask that you keep all those affected by this tragedy in your prayers,” he added.