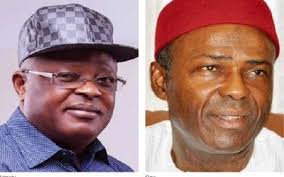 As politicians are allready preparing for 2023 general elections, a coalition of Igbo youth groups from the southeast Nigeria have endorsed two politicians for the presidency in 2023 –

The groups made the endorsement in a statement after their joint meeting in Abakiliki, Ebonyi state capital.

The youths described the minister of science and technology, Dr Ogbonnaya Onu and the Ebonyi state governor, David Umahi as the best Igbo presidential candidates.

A coalition of Igbo youth groups and Ohanaeze Ndigbo Youth Council Worldwide, OYC have endorsed two politicians from the southeast for the presidency in 2023.

The groups in a statement after their joint meeting in Abakiliki, the Ebonyi state capital on Saturday, August 15, recommended the minister of science and technology, Dr Ogbonnaya Onu, and the Ebonyi state governor, David Umahi as the best Igbo candidates to succeed President Muhammadu Buhari, The Nation reported.

The youths said that they justified their recommendations on the argument that both Onu and Umahi were transparent in governance in addition to having proven track records of achievements.

The youth groups extolled Umahi as the best performing governor in the southeast region with evidence of infrastructural development in Ebonyi state.

On the other hand, they described Onu as an experienced politician who played a key role in the merger of three political parties that formed APC.

According to them, the minister has good leadership qualities, is tested and trusted, a great Nigerian patriot and without any trace of corruption allegations.

“These are the best presidential materials and candidates Igbo youths present to Nigerians at the moment,” the groups said.

They explained that that other more qualified Igbo politicians who are capable of contesting for the presidency are either facing corruption charges or lack the structure to actualize their ambitions.

Meanwhile, Bayo Osiyemi, a former chief press secretary to Governor Lateef Jakande of Lagos, has joined those canvassing for a Bola Tinubu presidency.

Osiyemi who said he has never been passionate about any Nigerian politician after Chief Obafemi Awolowo and Jakande, the way he has taken to Tinubu, is of the opinion that the former Lagos state governor can fix the challenges currently witnessed in the country.

Osiyemi, however, said the achievements of Tinubu so far cannot be equated with those of Awolowo and Jakande individually.