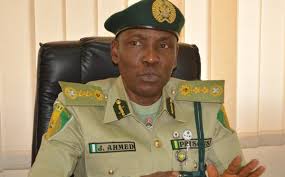 Nigerian Correctional Service, NCoS, has promoted 62 senior officers who participated in the 2019 promotion exercises conducted by the Civil Defence, Correctional, Fire and Immigration Services Board, CDCFIB.

In a statement signed by the Deputy Controller-General of Corrections in charge of Human Resources on behalf of the Controller General of Corrections, John Mrabure said the release of the promotion is sequel to the approval of Civil Defence Correction Fire and Immigration Services Board, CDCFIB meeting of 16th July 2020 and signed by the Secretary of the Board, Mal. Alhassan S. Yakmut, in a letter No. CDCFIB/NPS/D/S/CORR/505/Vol./144.

The Controller General of Correction, Ja’afaru Ahmed fcimc congratulates the affected officers and enjoined them to be more committed to their responsibilities.