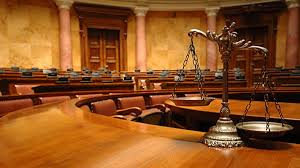 To serve as deterrent to others, a Lugbe Grade I Area Court, Abuja on Tuesday, ordered that a security guard, Isaac Johnson, who allegedly abducted a 17-year-old girl, be remanded in a correctional facility.

The police charged Johnson, 23, a resident of Gbaupe village, Airport Road, Abuja with the abduction of a minor girl.

Jibrin alleged that the defendant criminally abducted the complainant’s 17-year-old daughter and kept her in his house for two weeks.

He alleged that when the complainant told Johnson to free her daughter, he refused and challenged her to go to hell.

The prosecutor said that the defendant during police investigations made confessional statements.

Jibrin said that the offence contravened the provisions of sections 275 and 274 of the Penal Code.

Johnson, who pleaded not guilty, told the court that he did not abduct the girl, NAN reports.

“She is my girlfriend. I did not abduct her sir, she came to spend some time with me and I asked her to go back to her parents, but she refused,” he said.

In his ruling, the Presiding officer, Mr Abubakar Sadiq, ordered that the defendant be remanded in Kuje Correctional Centre until August 31.