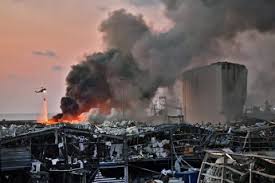 The Federal Government has on Monday clarified that there is no Nigerian among the casualties of the August 4 explosion in Beirut, Lebanon, which claimed over 150 lives and injured hundreds of others.

The incident, which was reported to have been caused by a blast inside a warehouse, released a strong shockwave causing catastrophic damage to infrastructure and buildings in different parts of the city.

The Ministry of Foreign Affairs in a statement in Abuja on Monday commiserated with the Lebanese government over the tragedy.

In a statement by the ministry spokesman, Mr Ferdinand Nwonye, titled, ‘Federal commiserates with Lebanon over deadly explosion’, the FG said it was in solidarity with the Arab nation in this period of grief.

Nwonye, however called for international support to facilitate the rebuilding process.

The statement read in part, “The Federal Government of Nigeria wishes to commiserate with the government and people of Lebanon over the August 4, 2020, deadly explosion that occurred in the main seaport in Beirut.

“The Government of Nigeria is in solidarity with the nation of Lebanon in this period of grief and calls for international support to facilitate the rebuilding process.

“The Ministry of Foreign Affairs wishes to inform the general public that reports from the Embassy of Nigeria in Beirut indicate that, so far, there is no reported case of Nigerian nationals among the dead but the host authorities are still assessing the impact of the damage caused by the massive explosion.”