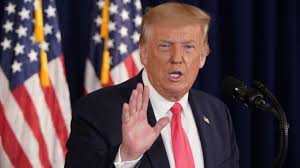 The executive orders establish a payroll tax holiday through the end of the year for Americans earning less than $100,000 a year.

They also defer student loan payments through the end of the year; continue eviction moratoriums; and extend enhanced unemployment benefits that expired last week, but at a reduced level of $400 instead of the prior $600.

The orders, which Trump announced in a press conference at his golf club in Bedminster, New Jersey, come after talks with Democrats over another round of assistance hit an impasse Friday.

Democrats promised last week to file a legal challenge if Trump acted through executive order to circumvent Congress, which has the constitutional authority to determine federal spending.

Trump brushed off those challenges Friday when he said he would take executive action. “You always get sued,” he said.

Treasury Secretary Steve Mnuchin and White House chief of staff Mark Meadows indicated after talks with Democrats appeared to break down on Friday that Trump could act on his own to implement three pieces under discussion: renewing federal unemployment benefits, extending an eviction moratorium and providing student loan relief.

House Speaker Nancy Pelosi, D-Calif., had previously indicated Trump may have the authority to extend the eviction moratorium.

Trump first threatened Thursday that if a deal was not reached by the end of the week — a largely arbitrary deadline — then he would utilise executive orders to circumvent Congress and enact jobless benefits and an eviction moratorium on his own.

At the last-minute press conference Friday night, Trump said that an executive order was “being drawn right now” and accused Democrats of holding “critical relief hostage.”

The Democratic negotiators, Pelosi and Senate Minority Leader Chuck Schumer of New York, told reporters on Friday they had offered the White House a compromise that would have included about $2 trillion in aid, which was rejected.

The greater than trillion-dollar gap remaining between the parties includes their disagreement on continued unemployment benefits. Congress created a $600-a-week additional payment for the jobless earlier this year, but was unable to find a deal to extend the payments after they expired at the end of July.

The two sides also remain apart on how school funding should be disbursed. Pelosi told reporters the White House wants the money to go largely to schools that reopen.

Democrats want the aid to also fund schools that are unable to reopen and must spend to launch and implement distance learning programs.