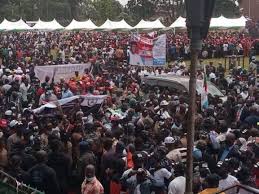 Chairman of the All Progressive Congress, APC Interim Management Committee and Governor of Yobe State, Mallam Mai Bala Buni on Saturday, said the party will take back Edo state without violence.

Buni therefore charged supporters of the party in the State to shun violence during campaigns and during the September 19 governorship election.

Addressing party leaders and supporters at the University of Benin Sports Centre, venue for the flag-off of the party’s campaign in the state, he assured that the party would retake Edo State.

Buni said the rally was simply to announce that the APC would retake the state, without violence.

“Last four years you voted for APC and now we want you to vote for APC and claim our state. You should not be involved in violence during the campaign and election, because victory is ours. You should ensure that you go out and vote for APC, and your votes will count,” he said.

Buni, who presented the party flag to the party’s governorship candidate, Pastor Osagie Ize-Iyamu, said that the President and national leader of the party, Muhammadu Buhari, formally endorsed the candidate last Friday, by presenting him with the same flag.

Earlier in his speech, the Chairman of the APC National Campaign Council and Governor of Kano State, Abdullahi Ganduje, congratulated the state’s campaign council of the party for its unit to unit, hamlet to hamlet and village to village campaigns.

Ganduje noted that with the crowd present at the campaign flag-off, APC would win the September 19, governorship election.

He added that with the simple agenda of the party’s candidate, victory was already assured.

Also speaking, former governor of the state and immediate past national chairman of the party, Adams Oshiomhole, said Ize-Iyamu is coming to re-engineer the development of the state.

He said, “When Ize-Iyamu becomes the governor, he would bring back government’s property privatised by governor Godwin Obaseki, especially the Edo Central Hospital, for both the rich and the poor.”.

In his speech, Pastor Ize-Iyamu who appreciated the Governors of Kaduna, Jigawa, Ogun, Ondo, Kebbi, Niger as well as Lagos and Kogi, who were represented by their deputies, members of the national assembly and ministers for their support, said APC would win the September election in all of the 18 LGAs in the state.

He said: “In this election, we will not only win but win the 18 LGAs. Never again will we have a governor that is an ingrate, or a governor who will not develop our state or empower our youths.”