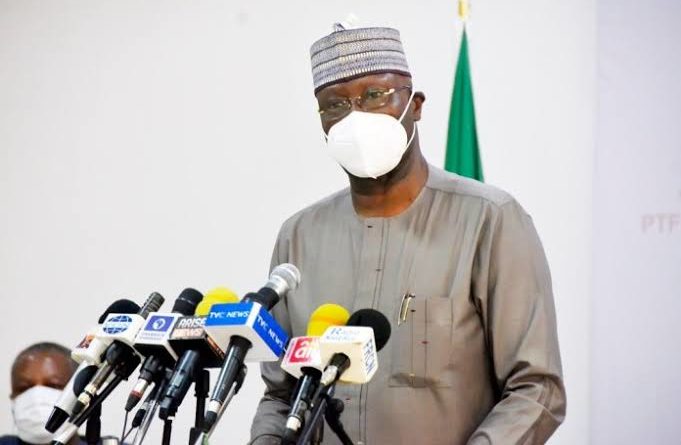 The Federal Government has mandated the state governments and the FCT to enforce non-pharmaceutical guidelines, primarily the use of face masks, in public appearance and places.

The Secretary to the Government of the Federation, SGF and Chairman, Presidential Task Force, PTF on COVID-19, Boss Mustapha, said this in Abuja at the 55th joint national briefing of the task force.

Mustapha noted that for the past nine weeks (from 2nd June 2020), the government has been running phase 2 of the eased lockdown, which has witnessed two extensions.

He said that these extensions were necessitated by observed lack of compliance with prescribed measures, dangers associated with community spread infections, and the need to strengthen critical areas of the Response Strategy for effectiveness.

Mustapha said that prior to the Sallah break, the PTF informed the nation that the 6th Interim Report and recommendations would be submitted to President Muhammadu Buhari for his consideration and approval.

The PTF chairman added that the PTF team met with the President on Wednesday 5th August 2020 to brief him of the situation on COVID-19 and the next steps.

He said that the recommendations made to the President were borne out of the diligent evaluation of the situation in Nigeria as well as regional and global experiences and that the considerations were also guided by the three thematic areas movement, industry, and labor; and community activities.

“After due consideration of the recommendations, Mr. President approved the maintaining the current phase of the National Response to COVID-19 for another four weeks in line with the modifications reflected in the report; partnering with states and local governments to improve community sensitisation and engagement to the COVID-19 response.

“Mandating state authorities and the FCT to enforce non-pharmaceutical guidelines, primarily the use of face masks in public appearance and places; encouraging state governments to collaborate with local government authorities to intensify necessary measures such as contact tracing, grassroots mobilisation and risk communication; and Strengthening of collaboration with other mandate groups at Federal/State levels to harmonise the country’s COVID-19 response, on the short, medium and long-term basis,” Mustapha said.

He added that the PTF, within the same period of reporting, prioritised areas of major focus for the extended Second Phase of the Response; using data and science to inform decision-making; improving the efficiency of response activities; emphasizing personal responsibility of individuals in preventing transmission; and supporting the health care system and strengthening the adoption of non-pharmaceutical interventions.

While giving a review of the current situation of the virus in the country, the SGF said that, in the last month, the number of states with over 1000 confirmed cases increased from four to 10 and the FCT.

He said that, while Nigeria has conducted 43 percent more tests in July than was done in June, the positivity rate had also decreased, showing the progress made in access to testing.

“Likewise, our case management efforts have also seen a reduction in the fatality rate from 1.9 percent in June to 1.7 percent in July.

“Community transmission is increasing, as reflected in the fact that 536 Local Government Areas – 69 percent of the total – have reported a COVID-19 case,” he said.

He added that, while the world continues to be confronted with the reality of a new normal foisted on all humanity by the outbreak of the coronavirus pandemic, the virulence and novelty of the virus had made it compelling for humanity to work together to put in place strategies to contain its spread and ensure that the delicate balance between dealing with the pandemic as a public health concern and guaranteeing livelihood is maintained.

The SGF said that, to sustain gains already made, the PTF recommended to the President, the retention of the current phase of the response with minor changes to address economic, socio-political and health concerns.

He added that the major changes being proposed were aimed at achieving the gradual re-opening of international air flights within established parameters; re-opening of rail transportation within established parameters; granting permission to exit classes to resume ahead of examinations; allowing civil servants from Grade Level 12 to resume work; and opening recreational parks for supervised exercises.

On the achievement of PTF, he said: “The details of the above data guided our national response and informed the policies put in place which played key roles in recording the following successes: Use of data and technology in improving surveillance, contact-tracing and testing efforts; Significantly increased testing capacity with the activation of 60 laboratories in 31 states and the FCT, as well as the accreditation of several private health laboratories.”

He added that the PTF had doubled “the number of tests taken within a month from 130,000 to 304,221; increased risk awareness through collaboration with traditional, religious and community leaders as well as partners; ensured stronger collaboration and partnership with the legislature; successful evacuation of over 8,000 stranded Nigerians abroad at minimal cost to the government.”

Mustapha said the task force is making “strong coordination with the private sector to mobilise resources for the response; Mobilise more partner support for the response at the state level; joined the global community in the clinical trials for vaccine ahead of a potential mass deployment; laying the foundation for homegrown research activities for a domestic cure; and developed guidelines to support the safe reopening of other sectors of the economy.”

He also listed providing technical support for the development of Incident Action Plans (IAPs) for the States; and holding regular consultations with State Governors, Commissioners for Health, and other related sectors.

Talking about the challenges, the SGF asserted that the PTF assessment also revealed that their accomplishments and plans notwithstanding, there were challenges that continue to pose a considerable concern.

According to him, the challenges include the increased non-compliance with non-pharmaceutical prevention measures; and lack of enforcement of necessary guidelines issued to preserve lives; and insufficient engagement by some states with the national response.

Others are a lingering concern about the gap between identified cases and the actual burden of disease; and apathy, fatigue and disbelief combining to challenge public enlightenment, compliance, and behavior change.

“To address these challenges and continue improving our National Response to eventually win the fight against the pandemic, the PTF reached the conclusion that for Nigeria, it is important to ensure that restrictions are not completely relaxed in order to control transmission.

“It is also important that at this Community Transmission Phase of the pandemic, sub-national governments step up to take more responsibilities by owning the response,” he said.