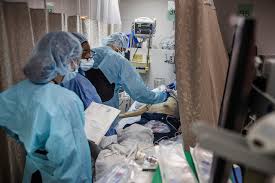 University of Washington health experts forecast on Thursday that nearly 300,000 Americans could be dead from COVID-19 by December 1.

They however said 70,000 lives could be saved if people were scrupulous about wearing masks.

The prediction by the university’s widely cited Institute for Health Metrics and Evaluation comes as top White House infectious disease advisors warned that major U.S. cities could erupt as new hot spots if officials there were not vigilant with counter-measures.

“We’re seeing a rollercoaster in the United States. It appears that people are wearing masks and socially distancing more frequently as infections increase, then after a while as infections drop, people let their guard down,” Dr. Christopher Murray, director of the IHME said in announcing the university’s latest forecast.

The U.S. death toll stands at over 159,000, the most of any country in the world, with 4.8 million known cases. (Open tmsnrt.rs/2WTOZDR in an external browser for a Reuters interactive graphic)

The IHME said infections were falling in former epicentres of Arizona, California, Florida, and Texas, but rising in Colorado, Idaho, Kansas, Kentucky, Mississippi, Missouri, Ohio, Oklahoma, Oregon, and Virginia. Those findings are consistent with Reuters tallies.

Ohio Governor Mike DeWine, a Republican, on Thursday said he had tested positive for COVID-19 ahead of a planned meeting with President Donald Trump, but had experienced no symptoms of the illness.

Tennessee and North Carolina reported record single-day increases in deaths on Thursday with 42 and 73, respectively.