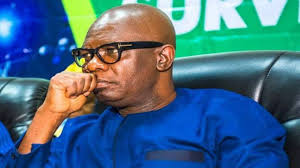 It was also gathered that supporters of Ajayi were out of the state in preparation for his official declaration for Zenith Labour Party, ZLP.

The public and media space had been bombarded with posters that the deputy governor had dumped the Peoples Democratic Party, PDP to contest the election under the ZLP.

Meanwhile, no fewer than 2150 delegates across the 203 wards in the state are expected to vote for their preferred candidates.

The governorship candidate of the party, Eyitayo Jegede was also at the venue of the election while most of the party’s aspirants in the last gubernatorial primary of the party are absent, except Mr Godday Erewa.

The outgoing chairman of the party, Clement Faboyede assured that the election would be a transparent, fair and free election, saying the process would produce a formidable team ahead of the October 10 governorship election

Faboyede said aspirants in the last gubernatorial primary of the party had all agreed to team up with the new executives that will emerge after today’s election to move the party forward.

National officers of the party from Abuja and security officials are on ground to ensure the smooth conduct of the state congress.