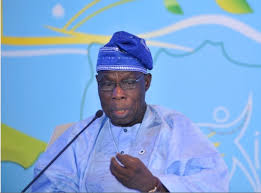 Minister of Transportation, Hon. Rotimi Amaechi may have calmed down Nigerians asking for the naming of rail stations after former Nigerian leader, Olusegun Obasanjo and others.

In a statement Friday night, Amaechi said more prominent Nigerians will still benefit from the Federal Government’s naming of railway stations across the country.

He was specifically reacting to the demand by rail workers union, that the late Alhaji Waziri Mohammed, chairman of the board, be honoured with a big railway station.

The Nigerian Union of Railway Workers, NUR actually wanted Amaechi to cancel the naming of the Apapa Railway Station after Asiwaju Bola Tinubu and name it after Mohammed.

Amaechi said: “We are naming a bigger station after Waziri Mohammed.”

The General Secretary of the NUR, Mr Segun Esan, demanded the immediate reversal of the naming of the Apapa Railway Station to late Mohammed.

According to him, Mohammed, until his death was the Chairman of Nigerian Railway Board.

He said it would be proper to name the Apapa Station after Mohammed, who died while in active service, as a mark of his sterling contributions to nation building.