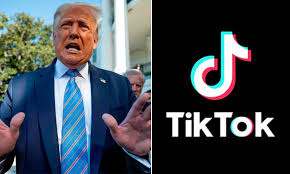 President Donald Trump is expected to roll out an executive order, banning TikTok from the United States.

He told reporters he could sign an executive order as early as Saturday.

“As far as TikTok is concerned, we’re banning them from the United States,” Mr Trump told reporters aboard Air Force One.

He will be following the Indian example, which banned the Chinese video-sharing social networking service on 29 June.

India’s Ministry of Electronics and Information Technology banned TikTok along with 58 other Chinese apps stating a threat to the sovereignty and security of the country.

The ban followed the military clash between Indian and Chinese troops in a disputed territory along their shared border in Ladakh.

TikTok is owned by ByteDance, a Beijing-based internet technology company founded in 2012 by Zhang Yiming.

It is used to create short dance, lip-sync, comedy and talent videos.

ByteDance first launched Douyin for the Chinese market in September 2016.

US security officials have expressed concern that the app could be used to collect the personal data of Americans.

TikTok has denied accusations that it is controlled by or shares data with the Chinese government.

The fast-growing app has up to 80 million active monthly users in America and the ban would be a major blow for ByteDance.