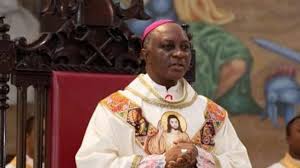 The Catholic Archbishop of Lagos, Most Reverend Alfred Adewale Martins, has expressed deep concern over the killings in Southern Kaduna, challenging the government to show more will to deal with the situation.

According to the cleric, ‘we have seen too many occasions in which villages were attacked in the middle of the night and people including babies, children and women killed with their properties destroyed while they were in bed at night.’

Archbishop Martins, in a press release signed by the Director of Social Communications, Rev Fr Anthony Godonu, noted that: ‘The pattern has been repeated in Benue, Taraba, and Adamawa states. We have situations in which people are too afraid to go to their farms because of the so-called bandits.

‘Government cannot be exonerated from the accusation of collusion with the criminals when more lip service is paid to the problem than adequate practical efforts to contain the situation and punish the perpetrators.’

The Archbishop advised the Government of Kaduna State in particular to genuinely engage religious leaders in Southern Kaduna to help build peace among the people.

‘If people can see good faith on the part of government and see adequate effort to arrest the perpetrators and bring them to face the law, the effort at achieving peace would be achieved.’

In the same way, Archbishop Martins urged Nigerians to do everything possible to rid the country of corruption before it is too late.

He said this has become necessary as corruption, a cankerworm, has continued to ravish all sectors of the nation’s fabric, stalling growth and development while also beclouding all the values we hitherto hold sacrosanct.

Speaking in the wake of recent allegations of monumental fraud raised against top echelons of some major commissions set up by the Federal Government such as the NDDC, EFCC and NEDC, Archbishop Martins described the drama surrounding the ongoing probes of government agencies by the NASS as shows of shame.

According to him, the effects of corruption in their entirety are even more hazardous to Nigeria and Nigerians than the COVID-19 pandemic.

“Recently, we saw on national television how ministers and members of the National Assembly were making insinuations about the level of corruption in their arms of government, even as the nation’s resources continue to be looted by those who run the commissions under scrutiny.

“It was very embarrassing to listen to the verbal exchanges between the ministers and National Assembly members descend into hurling insults and making allegations of corruption at one another. Then we had the fainting theatricals acted out by the acting managing director of NDDC, Prof Pondei.

“These just confirmed to those who were doubtful, that corruption is still very much alive even in a government that was voted in on the promise of fighting corruption. We can see clearly that the welfare of people was not at the heart of the disagreements. It is even more shameful that all these allegations of billions of naira under contention are coming at a time when governments in other countries are busy finding ways to cushion the effects of COVID-19 on their citizens and working hard to stabilise their economies in the face of the present uncertainties.” he said.

Archbishop Martins also wondered what would become of the ongoing probes, including that of the former EFCC Acting Chairman, Mr Ibrahim Magu.

‘Over the years, we have watched governments institute panels to investigate and probe corruption allegations, only for the outcomes to fizzle out and the culprits allowed to ‘go and sin no more.

‘We do hope that this time, the Federal Government will take more decisive steps to show that it truly intends to rid the country of corruption, particularly among the ruling class. We cannot continue like this. We must begin to work to rid our country of corruption not only in words but also in deed.’

The prelate called on the political class to have a change of heart or face the wrath of God.

He tasked Nigerians to be bold in challenging unfavourable government policies and actions, urging them to demand from the leaders accountability and good governance at all times.