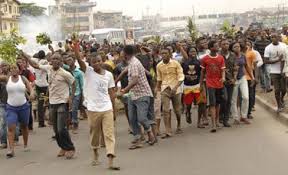 Concern youths in the oil communities of Akwa Ibom State, South-South Nigeria on Thursday, protested over what they called ‘high underdevelopment and infrastructural decay’ in their areas.

The youths warned that if relevant government authorities failed to intervene in the situation, it may degenerate into serious crisis.

They decried the abandoned projects in their communities by the Niger Delta Development Commission.

The aggrieved youths drawn from the affected communities in Eastern Obolo, one of the major crude oil producers in the State, were led by the chapter Chairman of the Ijaw Youths Council, IYC, Comrade Festus Jonah Adasi.

Other youths’ leaders who took the matter before the Paramount Ruler of Eastern Obolo, His Royal Majesty, Harry John Etetor, in his palace at Elile, were Comrade Ken Ukoima of Oru Obolo, a socio-cultural group and Comrade Emmanuel Paul.

Addressing the monarch and his council members, the IYC leader condemned several years of socio-political and economic marginalization of the area by successive governments, explaining that such neglect of the oil-bearing areas of Eastern Obolo has brought untold hardship on the people.

He said, “The major access road from Okoroette, the Local Government headquarters to Elile and Amadaka communities which you traversed to this palace is completely cut off from the rest of the communities; I’m happy you saw it and felt the pains as you were coming.

“Besides, since the inception of NDDC in 2000, no Obolo person has been named into the NDDC board, at least such officials would have influenced federal projects through NDDC to our oil ravaged communities.”

Also, Comrades Ukoima and Paul disclosed that the lack of functional health facilities had led to several infant and maternal mortalities as the only General Hospital established by former governor Godswill Akpabio remained totally out of tune with modern hospitals.

“In this place, we don’t have up to six functional secondary schools and three primary schools, yet over five oil companies that contribute a percentage of their earnings to NDDC cannot address infrastructural challenges in this place that they have been exploring and exploiting oil for years,” they said.

Responding, the Monarch charged the youths not to take laws into their hands, explaining that the oil status of Eastern Obolo had been hijacked by all the other 30 Local Government Areas of the State.

He alleged that “they all lay claim to being host communities to oil companies operating in oil-bearing areas of Akwa Ibom”.

He recalled that “since the creation of Eastern Obolo 24 years ago, no meaningful infrastructural development has taken place either from the Federal or state governments or NDDC, except the current administration of Governor Udom Emmanuel, who had awarded contract for the construction of Okoroette, Elile and Amadaka roads.

Although the road had since been abandoned, the monarch, who lamented that lack of access road to his palace, had forced him to relocate to Uyo, the state capital, appealed to the state government to impress it on the contractor, Nigerpet, to return to site “so I can return to my domain to stay with my subjects”.

Besides, the monarch lamented that the collapse of all the internal roads in his domain has created additional difficulty for the mostly agrarian residents and fishermen to evacuate their goods to the big markets at the mainland parts of the State.