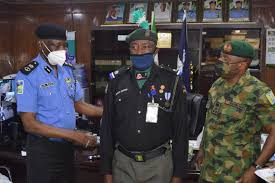 …charges them to display high level of professionalism, commitment

252 police officers in Kano state have been charged to display a high level of professionalism and commitment in the discharge of their duties and responsibilities.

Kano state Commissioner of police, Habu Ahmed gave the charge in a statement on Wednesday by the spokesman of the command, Abdullahi Haruna.

According to the Commissioner, “To whom much is given, much is expected,” and stressed the need for the officers to be steadfast and resolute in the discharging of their constitutional roles”

While calling on the people of the state to adhere to the COVID-19 protocols, Ahmad also wished Muslims faithful blissful and peaceful Eid-el-Kabir celebrations.

One of the promoted officers, SP Muktar Sabiu, commended the Inspector General of Police, IGP, Mohammed Adamu, and the Police Service Commission for the gesture.

Sabiu however pledged that they will be committed and dedicated to their duties.