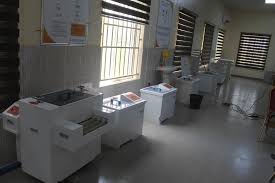 This was aimed at fast-tracking the implementation of the National Digital Economy Strategy and Policy.

The projects, which the Honourable Minister of Communications and Digital Economy Dr Isa Ali Ibrahim Pantami virtually commissioned include Information Technology Hubs at Ahmadu Bello University, Zaria in Kaduna State and the University of Lagos respectively, and the IT Community Centre in Daura, Kastina State.

Pantami stressed, “the National Digital Economy Policy and Strategy document strategically captures the three focal points of Economy, Security and Anti-corruption of President Buhari’s administration, and the projects are directly attached to the pillars of the National Digital Economy for a digital Nigeria, which includes promoting digital skills, a digital society, Infrastructure and the promotion of indigenous content.”

He pointed out that the IT hubs in Kaduna and Lagos were established in other to promote digital economy as they will make it easier to identify young innovators, support and mentor them, incubate their ideas and help them seek funds.

While the IT Community Centre (ITCC) in Daura, Kastina State is a Centre for digital literacy, because it is part of the plan of the present administration to make sure that 90% of Nigerians are digital literates, the minister added that the sector was determined to ensure entrepreneurship thrives so that the current trend of producing employees will be replaced by digitally skilled entrepreneurs who are employers of labour.

“It is because of this that even during this pandemic we established two virtual institutions, digitalnigeria.gov.ng and academy.nitda.gov.ng”, the virtual learning institutions offering world-class trainings in different spheres of technology including Artificial Intelligence, Internet of Things, Cloud Computing, Cybersecurity etc. where our youths can acquire digital skills that will place them on a globally competitive pedestal as the global outlook has shifted from mere certificates to practicable skills,” Pantami added.

Director General of NITDA, Mallam Kashifu Inuwa Abdullahi CCIE while delivering his goodwill message said “this has shown the commitment, will and action in implementing the digital economy”.

He said a lot had been done in terms of the broadband plan and other initiatives as he called on the government to encourage people building infrastructure to take building ICT infrastructure as part of the master plan as done in other countries.

“The unprecedented disruption by Covid-19 has made the need for digital economy more urgent unlike before”. The government operations, industry structure and business are being disrupted which in turn has made the digitalization of the economy, in general, to be widely facilitated.

The projects commissioning by the Minister of Communications and Digital Economy, Dr. Isa Pantami and witnessed by His Excellency, the Executive Governor of Borno State, Professor Babagana Umara Zulum, the Minister of Works and Housing, Mr. Babatunde Fashola and the Minister of Finance Budget and Planning, Mrs Zainab Shamsuna Ahmed, Chief Executive Officers of Agencies and Parastatals under the supervision of the Ministry and other IT stakeholders also include Tertiary Institution Knowledge Centre Enugu State Polytechnic, NIGCOMSAT Northwest Regional Office, Kaduna State and NCC’s Emergency Communications Centre Kaduna.