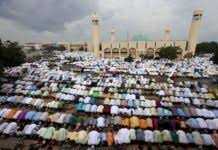 As muslims are preparing to celebrate Sallah this Friday, Minister of the Federal Capital Territory, FCT Malam Muhammad Musa Bello, has announced that there will be no Eid prayers at the National Eid prayer ground along the Umaru Musa Yar’adua Expressway, Airport Road in Abuja.

The FCT Minister, however directed that all worshippers should hold Eid prayers in the premises of their neighborhood Juma’at mosques, adding that Eid prayers should last for a maximum of one hour only between 8 am and 10 am.

This was resolved after a meeting which featured presentations from the Health, Security and Enforcement Departments of the FCT, and taking into cognizance the guidelines as released by the Presidential Task Force on COVID-19 as regarding the upcoming Sallah celebrations.

“Minister of the FCT Malam Muhammad Musa Bello, on Monday, 27th of July 2020, chaired a meeting between the FCTA and members of a delegation from the FCT League of Imams Initiative led by its Chairman, Imam (Dr) Tajudeen M.B Adigun to discuss the modalities of holding Eid prayers for the upcoming Eid-il-Kabir celebrations”

In his opening remarks, the Minister thanked the religious leaders for their cooperation in the course of the battle against COVID-19 in the FCT and said the FCT always made it a point of duty to consult with the relevant stakeholders prior to major decisions on COVID-19.

He said, “All other Eid celebrations and activities should be confined to homes as the extant guidelines on the closure of public parks, recreation, entertainment and sporting areas still subsists.

“Religious authorities are advised to regulate the flow of people entering and exiting places of worship.

“Also at the meeting were the Deputy Chief Imam of the National Mosque Dr Mohammed Kabir, the Secretary of the league of Imam Initiative, Malam Isiaq Zango, Imam Abdullahi Umar Adam of the JIBWIS Mosque and Imam (Dr) Yaqub Alhassan of Nigerian Police Force HQ Mosque. Also present were the Permanent Secretary, FCTA, Sir Chinyeaka Ohaa, the Chief Of Staff to the FCT Minister, Malam Bashir Mai-Bornu, the Acting Secretary of the Health and Human Services Secretariat Dr Muhammed Kawu the Chairman of the Ministerial Enforcement Task -Team, Mr Ikharo Attah and other senior staff of the FCTA” he said.