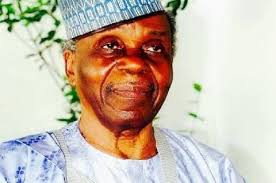 Minister of Information and Culture, Alhaji Lai Mohammed, has condoled with the Executive Governor of Kwara State, His Excellency AbdulRazaq AbdulRahman, and his entire family over the death of their patriarch, Alhaji AbdulGaniyu Folorunsho Abdul-Razaq, SAN (OFR).

In a statement issued in Abuja on Saturday, the Minister also sent his condolences to the Emir of Ilorin, Alhaji Ibrahim Sulu-Gambari, the Ilorin Emirate as well as the government and people of Kwara State.

He said the family of the deceased should take solace in the fact that Alhaji AbdulRazaq, SAN, led a worthy, fufilled and exemplary life.

”He left his footprints in the sand of time. He was not just a mere witness in the making of an independent Nigeria, he was an active participant.

”However, his greatest achievement, in my opinion, is the fact that he raised very successful children who, in their own rights, have also positively impacted Nigeria in their various fields of endeavour. That he lived long enough to see His Excellency, Gov. AbdulRahman AbdulRazaq, elected and sworn in as the Executive Governor of Kwara State, is no doubt the jewel in the crown of his incredible landmark achievements,” Alhaji Mohammed said.

”May Allah forgive Papa his sins and admit him into Aljannah Firdaus,” he said.