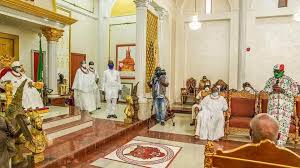 Governor Godwin Obaseki of Edo state was disgraced today at the Palace of the Oba of Benin after his convoy was blocked by angry residents, numbering in hundreds, who booed and disparaged the Governor as a thief.

Obaseki was reportedly at the Palace for royal blessings as he flagged off his campaign as the candidate of the Peoples Democratic Party, PDP in the Governorship election of Edo state.

Upon sighting his convoy from a distance, the people, hitherto rejoicing and making merry as usual at the ancient Palace, immediately formed an angry mob of protesters, confronting the embattled Governor with chants of “thief” and other disgraceful epithets, demanding that he leaves the Palace and not “pollute the environment with his dishonorable self.”

Obaseki and his accompanying aides were left perplexed and all attempts to salvage the situation only further angered the crowd who insisted that he leaves, stating that he has been rejected and is no longer their Governor.

Such rejection at the Palace holds great significance in the Benin Kingdom and Edo State as a whole.

It is perhaps the greatest indication that the Governor, presently struggling to get his new party, the PDP, in shape, will lose the Sept. 19 election.

A palace source who pleaded anonymity said “what took place today is a bad omen for Governor Obaseki and his PDP. He selfishly came for blessings at a place he has not really sowed any good seeds and he received boos and disgrace. It is a clear sign of rejection and what is to come.”

“Some of his followers have already gotten the cue and they are abandoning him despite threats and offering of monetary rewards. That campaign, starting like this, can never be successful. The people don’t want this man anymore.”

However, the Edo State Government has condemned the attack on its guests, notably governors and other Very Important Persons,VIPs, on Saturday, at the Oba’s Palace in Benin City, prequel to the flag-off of Governor Godwin Obaseki’s campaign for re-election.

In a statement, by the Special Adviser to the Governor on Media and Communication Strategy, Mr. Crusoe Osagie, the thugs were sponsored by the All Progressives Congress, APC, its candidate, Osagie Ize-Iyamu and the sacked National Chairman of the APC, Comrade Adams Oshiomhole, who he said had in the past few days engaged thugs to cause mayhem in the state.

According to him, “We are appalled by the deployment of thugs to the sacred grounds of the Oba Palace by the APC, Ize-Iyamu and Oshiomhole to harass guests who are in the state for the flag-off of Governor Obaseki’s campaign and had visited the palace to pay obeisance to His Royal Majesty, Omo N’Oba N’Edo Uku Akpolokpolo, Oba Ewuare II, the Oba of Benin.

“While we respect the boundaries of politics as it relates to the Palace, it is reprehensible that the APC, its candidate and their enablers would sponsor thugs to desecrate the palace, which is a clear case of desperation to score cheap points.

“This conduct is not a trait of Edo people and is condemned in the strongest possible terms, as we are courteous and welcoming to guests. It is obvious that these persons were mobilised for this task by those who have no regard for the palace nor want the progress and development of the state.”