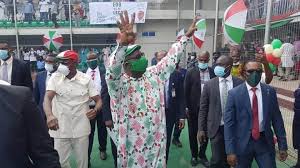 Governor of Edo state, Godwin Obaseki, who is also the governorship candidate of the Peoples Democratic Party, PDP in the 19 September election will today flag off his reelection campaign.
This is contain in a statement made available to newsmen by the Special Adviser to the Governor on Media and Communication Strategy, Mr Crusoe Osagie.
Osagie said the flag off is scheduled to commence by 10 am at the Samuel Ogbemudia Stadium, Benin City, in accordance with the National Centre for Disease Control, NCDC guidelines against the spread of coronavirus (COVID-19).

Osagie said “the Governor Obaseki-led administration has in the last three years and eight months positioned the state on a growth trajectory, noting that the majority of Edo people are ready to vote for Obaseki and his deputy, Rt. Hon. Comr. Philip Shaibu to give them the opportunity to do more.

“Governor Obaseki has performed excellently, touching all sectors of the state. His campaigns will be showcasing excellent governance and unmatched leadership positives. Obaseki has given a good account of himself on the back of the massive infrastructure transformation, education, healthcare, judicial and investment reforms, sustained efforts to evolve an industrial economy and a searing commitment to improving the wellbeing of Edo people.

“Obaseki’s popularity is unrivalled; we are accepted by our people from the villages to the urban centres. The acceptance is resounding and deafening and comes September 19, 2020 the governor will be reelected for a second term in office to consolidate on his people-oriented projects and reforms.”

Osagie cautioned youths in the state not to allow themselves to be used as tools to perpetuate any act of electoral malpractice.