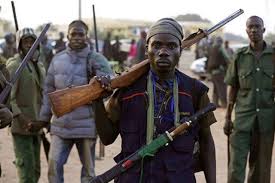 Three kidnappers were on Saturday killed in a shootout with a team of local hunters along the Lokoja-Okene highway, in Kogi State.

The hunters, including members of the Neighbourhood Watch from Okehi and Adavi local government areas of the state, raided the hoodlums at their hideout from where they were planning attacks on commuters plying the road.

The hunters in the early hours of Saturday reportedly engaged the kidnappers in a shootout during which three of them were gunned down, while others escaped with bullet wounds.

Two men believed to be scouts feeding the kidnappers with information have also been arrested.

Godwin Peter, a native of Ikeje in Olamaboro LGA and one Sanni Habib, from Idoji community in Okene LGA, were apprehended at about 4.30am by the hunters.

As of the time of filing this report all efforts made to get reaction from the state police command proved abortive.