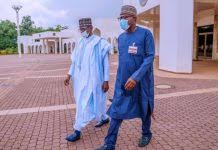 The All Progressives Congress, APC has expressed excitement at the return of former Speaker of the House of Representatives, Yakubu Dogara, back to the ruling party.

Yekini Nabena, APC Deputy National Publicity Secretary, expressed the feeling of the party while responding to the call by the Peoples Democratic Party, PDP for President Mohammadu Buhari to resign.

The opposition party said the APC administration has failed on account of its inability to address the two planks on which it sought and received the mandate of Nigerians.

However the APC spokesman said the PDP is ranting because of an impending massive defections that will hit the opposition party.

The statement read: “The recent and unintelligible rants by the Peoples Democratic Party (PDP) is not unconnected to the impending mass defections set to hit the failed opposition party.

“The PDP calls for the resignation of the President. How silly! Nobody expects the PDP to provide ideas on good governance going by their inglorious past and antecedents. We only reiterate that the PDP stays quiet while the President Muhammadu Buhari administration clear the rot they foisted on the country.

“Nigeria deserves a vibrant, purposeful and credible opposition, not the laughing stock we have been subjected to in the name of the opposition PDP.

“It is well within the rights of PDP members to abandon a rudderless and sinking ship for the progressive fold. Going by the popular axiom: Why fly like a hen when you can soar like an Eagle?

“We are particularly gladdened by the return of the former Speaker of the House of Representatives, Rt. Hon. Yakubu Dogara to the APC.

“As we work collectively to achieve the Nigeria of our dreams, we will no doubt encounter challenges along the way. But one thing is sure. Under the focused and sincere leadership of President Muhammadu Buhari, we are already delivering on key electoral promises of securing the nation, fighting corruption and improving the economy and livelihoods.”