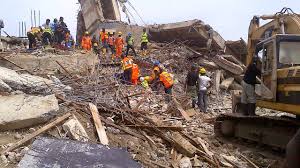 Many people are feared dead in Nigeria’s commercial capital, Lagos as residents of a building that collapsed in the Ebute Metta neighborhood were trapped under the rubble, local media reported.

“Our personnel are on the ground at the scene and rescue operations ongoing,” Nosa Okunbor, spokesperson for the Lagos State Emergency Management Agency said.

No casualties in the building collapse have so far been confirmed by Nigerian authorities, according to The Independent website.