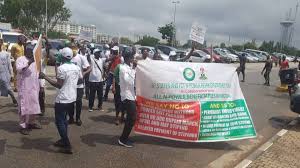 Idealposts-
N-Power volunteers on Thursday in Abuja staged a protest over their unpaid stipends and sudden disengagement by the Nigerian Government without a substantial exit package.

The protesters in their hundreds besieged the National Assembly in large numbers chanting anti-government songs.

The volunteers are agitating for permanent employment or payment of the sum of N600,000 to each of them before disengagement.

They also demanded the removal of the Minister of Humanitarian Affairs and Disaster Management, Sadiya Umar Farouk, for frustrating the programme.

The protesters, who came from 36 states of the country include Federal Capital Territory, also demanded payment of batch A and B beneficiaries until the transition was completed.

National President of the N-Power volunteers, Kabiru Aliyu Pelemi, said it would be a disaster for the country if the government pushed over 500,000 beneficiaries back into the labour market.

On his part, the FCT Coordinator of N-Power, Adeyeye Mojeed Adepoju, said many volunteers had not got their stipends for March, April, May and June.

The protesters after the submission of their letter to the leadership of the National Assembly, proceeded to the Ministry of Humanitarian Affairs to register their demands.

Recall that the minister, Sadiya Umar Farouk, who is in charge of the N-Power programme, had sent a farewell message to the batch A and B volunteers ahead of their disengagement.