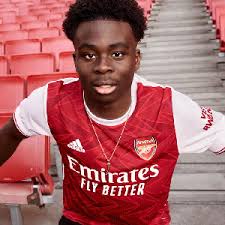 After committing his future to the club a few weeks back, Arsenal wonderkid Bukayo Saka will wear the number 7 shirt next season.

Saka has so far made 42 first-team appearances for the Gunners wearing the number 77.

But on Thursday morning, fans noticed that the 18-year-old’s number has changed to 7 on the club’s official website ahead of next season.

The number 7 shirt was left vacant when Henrikh Mkhitaryan moved on loan to Roma last summer, and has previously been worn by such Arsenal greats as Alexis Sánchez, Tomas Rosicky, Robert Pirès, Ray Parlour, Paul Merson and Liam Brady.

Saka has so far scored four goals and assisted 11 others in an Arsenal shirt, and the highly rated youngster recently signed a new deal that will keep him at the club until 2024.