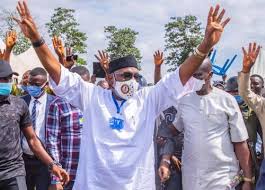 Governor Rotimi Akeredolu has been declared the winner of the governorship primary of the All Progressives Congress, APC in Ondo State, with 2,458 votes.

Akeredolu, who is also the incumbent governor of the state defeated his closest rival, Chief Olusola Oke and six other aspirants in the primary; they are Sola Iji, Isaacs Kekemeke, Olaide Adelami, Mrs Jumoke Anifowose, Nathaniel Adojutelegan and Bukola Adetula.

About 3000 delegates from all 18 local governments of Ondo State, participated in the indirect primary held at International Centre, The Dome, Akure.

The incumbent won in all the local government areas.

”This is to satisfy that Akeredolu Oluwa having scored the highest numbers of votes cast is here by declared the winner,” Bello stated.

He will now fly the flag of the APC in the 10 October governorship election.

In his acceptance speech, Akeredolu appreciated the electoral committee and the delegates for the free, fair and credible primary election.

Akeredolu also thanked all the aspirants and urged them to support him to win the war ahead of them and make Ondo State a sunshine state.

See the results below: