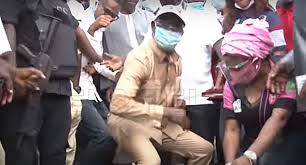 The former National Chairman of the All Progressive Congress, APC, Comrade Adams Oshiomhole, has said that those who were bent on destroying the party in Edo state have been forced out.

Oshiomhole stated this on Sunday at a reception organised in his honour by his kinsmen and supporters at his country home in Iyahmo, Etsako-West Local Government Area of Edo State.

The former governor told party faithful and supporters that the party remains more formidable with the absence of those who have been ousted.

He declared that nobody can force him out of the APC as he remains a loyal and founding member of the party.

He said, “A few weeks earlier, the snake said APC was his house and that he was not leaving, but less than 72 hours after saying this, he left.

“If we had burnt the house because the snake was giving us a problem, we will all have been homeless by now”.

Oshiomhole said he has come home to ensure that Pastor Osagie Ize-Iyamu is returned as governor of Edo State.

“I have come home for only one project, am not going back to Abuja until the project is completed.

“I came back home not to rest, but to work. We are a political Lion, we must commit ourselves to return to Osadebe Avenue.

“The man (Ize-Iyamu) that is coming is not a stranger. He campaigned for me in 2012 and I won all the 18 local government areas of Edo Edo State.

“He knows the roots, unlike the current governor who just became governor and does not know the efforts people made to make him governor.

“We will kick out this MoU governor and replace him with a pastor who will sweep out the Coronavirus party by the grace of God”, Oshiomhole stated.