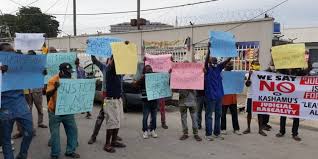 Lottery operators stormed the Federal High Court, Ikoyi, Lagos on Monday to protest what they consider ”judicial bias” in the handling of a lawsuit filed by Western Lotto Limited, belonging to politician Buruji Kashamu.

The protest is in connection with a lottery operation case between Western Lotto Ltd and National Lottery Regulatory Commission, Registrar of Trademarks, Premier Lotto Ltd & 22 others.

In the case being handled by Justice C.J. Aneke, Western Lotto Limited sued 23 rival lottery firms over alleged infringement on its licence on “Ghana games”.

One of the defendants is Premier Lotto Limited, popularly known as Baba Ijebu Gaming Limited, belonging to Chief Keshington Adebutu.

Meanwhile, in December 2019, Justice Aneke had authorised Western Lotto to enter into the offices of other defendants and produce evidence to back the alleged infringement on its licence on “Ghana games”.

However, protesters besieged the court, carrying placards with various inscriptions accusing the judge of bias.

Some of the inscriptions were, ‘Aneke, do the right thing’; ‘Justice is not for sale’; ‘We say no to Kashamu’s judicial rascality’; ‘Equity & Fairness = Justice; Padi-Padi Judgment = Injustice’; among others.

Meanwhile, the hearing which was meant to hold today has been scheduled for Tuesday.