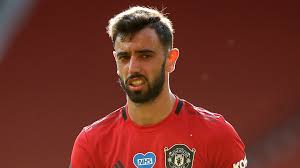 Bruno Fernandes has called for calm on the back of Manchester United’s FA Cup semi-final defeat to Chelsea, with the Portuguese pointing out that the Red Devils “were not the best before and are not the worst now”.

Ole Gunnar Solskjaer’s side wilted on the Wembley stage against Chelsea on Sunday.

Having entered that contest on a 19-game unbeaten run in all competitions, confidence was high inside the Old Trafford camp.

Solskjaer, however, made surprising tweaks to his system and starting line-up against the Blues, leading to a rather disjointed display.

Costly errors also undermined United’s efforts, with David de Gea failing to keep out efforts from Olivier Giroud and Mason Mount that he would have been expected to save.

United now have to dust themselves down for the resumption of their top-four bid in the Premier League.

One route to major silverware has been shut off, but they can still secure Champions League qualification and challenge for the Europa League crown in 2020. With that in mind, Fernandes has called for a sense of perspective.

The Portuguese has sparked a revival for the Red Devils, with his arrival in the January transfer window coinciding with an upturn in fortune, but he is fully aware that nothing has been achieved as yet.

Taking to Instagram after a 3-1 reversal against Chelsea, Fernandes said: “We were not the best before and we are not the worst now.

“We are really sad about the result and losing the chance to win the FA Cup, something we had hoped for. Now it is time to gather forces and fight for our goal in the Premier League.”

Fernandes did grab United’s consolation effort against Chelsea from the penalty spot – his ninth goal for the club through just 18 appearances.

Solskjaer will be hoping that there are more inspirational showings from him to come in what has become a vital run of games for the Red Devils.

They will be back in Premier League action on Wednesday when taking in a home date with former boss David Moyes and his West Ham side – with a window of opportunity having opened up there on the back of a 3-0 defeat for Leicester against Tottenham, that has United level on points and goal difference with the fourth-placed Foxes while holding a game in hand.