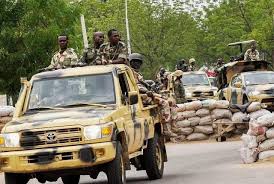 In continuation of the operational mandate to stamp banditry and untoward activities out of North-West zone of the country, troops of Operation SAHEL SANITY on 14 July 2020 neutralised 6 armed bandits.
Acting on credible Human Intelligence, troops of Operation SAHEL SANITY backed by helicopter gunships of the Air Component of Operation HADARIN DAJI stormed the bandits’ enclave at Komani Hills within Rukudawa general area of Zamfara State and made contact with the criminals elements.
According to a statement by Major General John Eneche, Coordinator Defence Media Operations, Defence Headquarters, the gallant troops overwhelmed the bandits with superior fire power killing 6 of them while others fled with grave gun shots wounds. One GPMG, one AK 47 rifle, one magazine and 34 motorcycles were recovered”
“Relatedly, troops of Operation SAHEL SANITY on 13 July 2020 responded to a distress call on an attempt by armed bandits to rustle cows at Kasele village in Batsari LGA of Katsina State. As they swiftly mobilized to the scene, the bandits fled in disarray thereby abandoning the animals. Afterwards, the gallant troops have maintained presence in the village and normalcy restored” it said.
The Military High Command congratulates the gallant troops for their dexterity and encourages them to remain resolute and sustain the offensive in the North West zone of the Country.