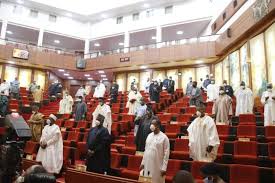 The Nigerian Senate on Tuesday passed a bill ammnding the criminal code, by changing the jail term for kidnapping from 10 years to life impresonment.
The bill, which was read for the third time on Tuesday, also seeks to remove gender restrictions in the issue of rape, and recognise males as rape victims too.
Other provision of the bill is to remove the statute of limitation, which means there would be no time limit for when a rape matter can be decided.
It seeks to eliminate time frame for prosecuting cases of sexual abuse by increasing the period from two months to as many years as the victim decides to seek action.
The bill titled, “A bill for an Act to amend the Criminal Code Act CAP C.38 Laws of the Federal Republic of Nigeria 2004” is sponsored by Oluremi Tinubu.
Passage of the bill was sequel to the presentation of the report of the Senate Committee on Judiciary, Human Rights and Legal Matter by the chairman, Opeyemi Bamidele.
In his presentation, Mr Bamidele said Nigerians at the public hearing expressed divergent views as regards the proposed amendments in the bill.
The Ekiti senator also said life imprisonment has been prescribed for kidnappers.
“The bill will address lingering issues starting with statute of limitation in the prosecution of rape and as well as defilement cases and it will curb the menance which has been on the rise.