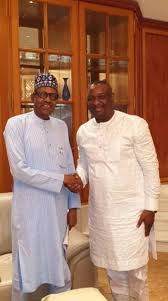 President Muhammadu Buhari has asked the Minister of State for Labour and Employment, Festus Keyamo, SAN to proceed with the execution of the Special Public Works Programme.
The minister and lawmakers had been at loggerheads over the implementation of the programme.
Keyamo in an interview with journalists on Tuesday said that the President directed him to continue with the exercise, which was earlier suspended by the National Assembly following a disagreement with the minister.
He said, “I have the instructions of my boss, Mr President, to proceed with the supervision of the preparation for the execution of the programme in accordance with the law.”
He was accused of trying to hijack the scheme from the National Directorate of Employment, the implementing agency of the project.
But Keyamo, who appeared before members of the National Assembly Joint Committee on Labour on June 30, accused them of seeking to control the implementation of the programme.
After engaging in a shouting match with members of the NASS Joint Committee, Senate President, Ahmed Lawan, called for the suspension of the programme.
The Special Public Works Programme is designed to employ 1,000 persons from each of the 774 Local Government Areas of the country.
Nigerians enlisted on the programme are expected to carry out public services such as street sweeping, waste disposal and the like.
The programme is aimed at engaging young unemployed citizens as well as providing a means of sustenance for them.