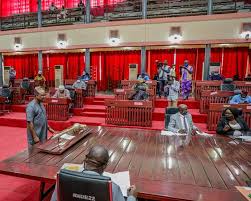 Oyo State House of Assembly on Tuesday reconstituted its standing committees in order to ensure effective and efficient oversight function.
Speaker of the Assembly, Mr. Adebo Ogundoyin who spoke during Tuesday’s plenary announced the reconstitution of the 27 house standing committees.
Ogundoyin urged members of the standing committees to take their oversight functions seriously as this will further help in presenting the 9th Oyo Assembly as a vibrant and focused house.
He said, “Your oversight functions are to aid the activities of the Oyo State Government hence every member must be actively involved in Committee assignments.
“It is not to witch hunt anybody but to assist the Government in proper implementation and execution of duties and responsibilities. I am convinced the 9th Oyo Assembly has what it takes to enhance governance, promote accountability and serve as watchdogs to other arms of Government including Ministries, Agencies and Parastatals”.
The committees have Akeem Mustapha as the Chairman of Public Accounts, Finance and Appropriation, while Ademola Olusegun Popoola heads the Local Government, Chieftaincy Matters and Honors Committee.
Olamide Francis Olagoke is in charge of Inter-Parliamentary Relations while Olatunde Taofeeq Kehinde oversees Works and Transport Committee.
Akeem Obadara is the Chairman House Committee on Security and Strategy.
The Chairman House Committee on Information, Media and ICT still remains Kazeem Olayanju while Bimbo Oladeji continues as House Committee Chairman on Women Affairs and Community Development.