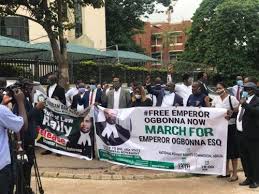 Members of the Nigerian Bar Association in Abuja on Tuesday staged a protest over the continued detention of their colleague, Emperor Gabriel Ogbonna, by the Department of State Services, DSS.
The protesters marched to the National Human Rights Commission to condemn the continued incarceration of the lawyer despite a valid and subsisting order of the court releasing him on bail.
He called on the NHRC to intervene in the matter and prevail on the security agency to release him in line with the court order.
The protesters thereafter submitted a formal petition to the commission and office of Attorney-General of Federation and Minister of Justice.
Responding on behalf of the commission, the Executive Secretary, Tony Ojukwu, said the organisation would write the DSS to furnish them with details of the case.
He said the commission does not support impunity and urged all government institutions to respect the rule of law and court order.
The lawyer is being held on the orders of Okezie Ikpeazu, Abia State governor, over a Facebook post that he visited a shrine outside the country where he swore an oath of allegiance and secrecy to a former governor of the state.
A Federal High Court in Umuahia ordered for the lawyer’s release or be charged to a court of competent jurisdiction.
Two weeks after the order was made, the DSS have neither released him nor charged him to court in violation of the order of the court.