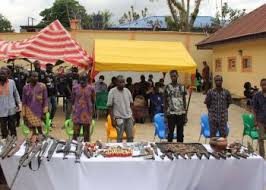 The Benue state Police Command on Saturday confirmed the killing of seven persons in Chembe Community of Logo Local Government Area following disagreement over compensation fund for mining sites in the community.
This was contained in a statement signed by the Police Public Relations Officer, PPRO, Catherine Anene, and made available to the News Agency of Nigeira, NAN in Makurdi.
The Police also dismissed allegations on various social media platforms that “suspected herdsmen” were behind the attack.
According to the statement, a company had discovered “precious stones” within the community and decided to compensate the locals for onward mining of the stones.
It further stated that preliminary investigation revealed that the crisis started within the community over who would benefit from the compensation fund.
“The crises at Logo has nothing to do with herders and farmers as speculated in the social media. It is a disagreement over benefits from mining proceeds.
“It was gathered that a mining company paid an amount of money to Chembe community as compensation for the mining sites, but members of the community disagreed over the rightful owners of the sites and this led to a fight that claimed seven lives.
“Investigation is still in progress,” the statement said (NAN)