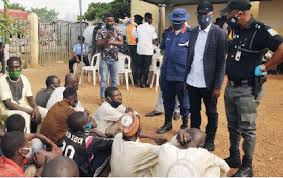 Spokesman for the command, CSP Danny Iwuchukwu, who stated this in a statement on Thursday in Enugu, alleged that Chioma is specialised in recruiting under-aged girls to run prostitution cartel.

Iwuchukwu further alleged that the suspect was recruiting underage girls aged between 12 and 16, and sending them to brothels in different states for prostitution.

He said that she was arrested in Enugu on June 18 following intelligence report on her nefarious activities.

Iwuchukwu said that the suspect, a widow who hailed from Nsugbe community in Anambra State, confessed to the crime and said she had been in the business for over four years.

“On their method of operation, she confessed that she works with a syndicate that brings the girls to her.

“And that her job is to give the girls out to different brothels where they would be prostituting and be remitting proceeds to her.

“She confessed that before giving the girls out, that she normally enters into an agreement with them.

“She said that the agreement varies from person to person putting into consideration how beautiful a particular girl is, while some pay her N50,000, others pay as much as N100,000.

“She further said that the agreement usually last for six months after which the girls will be freed.

“She, however, pleaded for forgiveness promising to stop the business,’’ he said.

Iwuchukwu said that the command has made contact with some of the girls (victims) recruited into the business by the suspect and they were willing to testify.

He, however, said that investigation was ongoing to track down some of the syndicate working for the suspect.