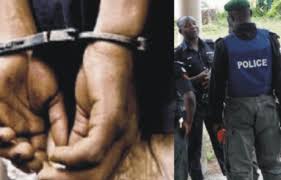 As the issue of rape and kidnapping continued unabated despite arrests by law enforcement agents, the Akwa Ibom State Police Command announced that it has arrested five persons for allegedly raping minors in the state.

The Police Public Relations Officer, CSP. Fredrick Nnudam disclosed this in a statement made available to newsmen on Thursday in Uyo.

Considering the consequences of their actions, Nnudam warned rapists to desist, citing section 1(2) of the Akwa Ibom State Violence Against Persons (Prohibition) Law, 2020, which provides life imprisonment for the guilty.

The Statement reads in parts, “The fight against perpetrators of rape and other gender-based violence in Akwa Ibom State yielded another breakthrough as five (5) suspects were arrested in the State.

“Responding to a distress call on 20/5/2020, detectives of Abak Division arrested a motorcyclist, one Edidiong Daniel Tommy (31) who diverted a 16-year-old passenger to his house situated at No. 75 Hospital Road, in Abak Local Government Area where he conspired with one other suspect now at large and had unlawful carnal knowledge of the 16-year-old girl at gunpoint.

On 21/6/2020 at about 5pm, following a complaint, Detectives of Eket Division arrested one Sam Akpan (30) of Atabong/Liverpool Road, Eket.

“Investigation revealed that the suspect bought cooked cow skin a.k.a “Kpomo” worth two hundred naira (N200.00) from a 10-year-old girl and thereafter lured her to his house on the pretext that he left the money at home. On reaching his house, he dragged the girl to his room and forcefully had carnal knowledge of her”

The PPRO maintained that the Detectives of Ikot Ekpene Division on July 5, 2020, through a credible intelligence apprehended one Godwin Willie of Ikot Ubo, Ikot Ekpene Local Government Area who forcefully had carnal knowledge of his 15-year-old daughter.

He added that on June 26, 2020, following a tip-off, operatives of Area Command, Etim Ekpo arrested one Joseph Ekeruke Inyang (36yrs) of No. 1 Primary School Road, Utu Etim Ekpo in Etim Ekpo local government area who lured a 12-year-old girl with five hundred naira (N500.00) to his room where he had unlawful carnal knowledge of her

“Following a complaint on 25/6/2020, Operatives of Ikot Ekpene Division apprehended one Nsisong Moses Asuquo (34) of No.7 Okonah Street, Ikot Ekpene Local Government Area who sexually defiled a 13-year-old girl. Investigation revealed that the suspect took the victim from her guardian to his home on the pretext of being a housemaid and severally defiled her before sending her away” he said.

He said the Commissioner of Police, CP Imohimi Edgal had reassured the victims of rape and other gender-based violence of effective remedies and protection against stigmatization and threats as encapsulated in all extant laws.