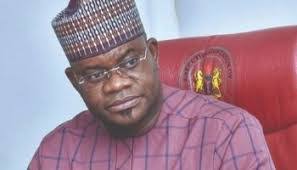 Governor Yahaya Bello of Kogi state has sworn an Acting Chief Judge and Acting President of the state Customary Court of Appeal, PCCA.
Those inaugurated are Justice Henry Olusiyi and Justice Bayo Olowosegun as CJ and PCCA respectively.
The ceremony which was given live coverage on national television took place on Wednesday at the Government House, Lokoja.
In a remark, the Governor paid glowing tributes to the former occupants of the offices describing them as Patriots.
He noted that their predecessors each served three different administrations and commended their sacrifices for the course of Justice in the State.
Bello expressed confidence in the abilities of the new helmsmen to continue on the same path.
He charged them to remain committed to the ideals of an egalitarian society.
In a vote of thanks, Justice Olusiyi attributed events in the State judiciary as acts of God.
He commended the Governor for his commitments to the judiciary and promised to continue to promote the course of Justice in the State.
Justice Nasiru Ajanah the former CJ died on Sunday 28th June at an Isolation Centre in Abuja for Coronavirus complications while Justice Shaibu Atadoga died after a brief illness a week earlier.