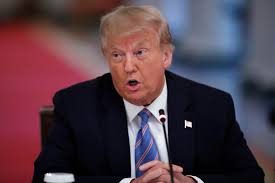 President Donald Trump of United States has repeatedly assailed the organization for alleged bias toward China and its slow response to the coronavirus outbreak in Wuhan.
But public health experts and Democrats have raised alarms that the decision may be short-sighted and could undercut the global response to the pandemic, which has infected 11.6 million people worldwide.
The U.S. has the highest number of reported cases in the world at nearly 3 million.
Trump first froze funding for the WHO in April while his administration conducted a review of its relationship with the entity.
Weeks later, he wrote to the WHO demanding reforms but did not specify what those reforms would be.
Sen. Bob Menendez (N.J.), the top Democrat on the Senate Foreign Affairs Committee, tweeted that the administration informed Congress of the withdrawal plans.
“To call Trump’s response to COVID chaotic & incoherent doesn’t do it justice. This won’t protect American lives or interests — it leaves Americans sick & America alone,” the senator tweeted.—thehill.com