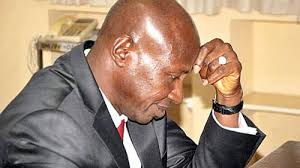 Acting Chairman of the Economic and Financial Crimes Commission, EFCC, Ibrahim Magu, has been suspended by the Presidency.

Magu was arrested on Monday by a combined team of the Department of State Services, DSS personnel and policemen at the Wuse II office of the EFCC to face an interagency committee investigating corruption allegations against him.

He was detained at the FCID in Area 10, Abuja, on Monday night on the orders of the committee that also questioned him on Tuesday morning.

A source in the Presidency confirmed the development Tuesday afternoon that Magu has now been suspended pending when a decision will be taken on him.