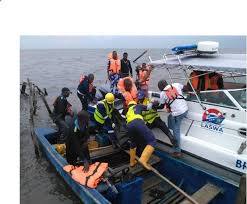 Lagos State Emergency Management Agency, LASEMA has disclosed that eight of the remaining nine victims in the Friday night’s boat accident were rescued from the water alive.
The rescue of the eight victims two days after the boat crash has brought to 16, the total of persons who survived the accident.
However, one more body was on Sunday retrieved from the Ikorodu waterway bringing to seven, the number of deaths recorded in Friday night’s boat accident.
A passenger boat, which left Ebute Ero in Lagos Island for Ikorodu around 8pm on Friday, capsized midway its journey tumbling all passengers and crew into the water.
Some of the passengers onboard the boat were identified as Layiwola, Ademola Jamilat, Ajobola, Olabisi, Sikiru, Ikome, Charles, Adesua, Iya Tobi, Tunde, Vivian, Peter, Monday, Bisi, Olalekan, Emeka, Victor, Ebeta and Korede Bada.
The Nation reported 10 of the victims were rescued and two corpses recovered that night while four more bodies were found on Saturday morning.
According to Director General (DG) LASEMA, Dr. Femi Oke-Osanyintolu, all seven dead bodies recovered were females, adding that the captain and his assistant were rescued alive on Sunday.
He said the boat violated the ban on night trips, adding it had a total of 21 passengers and two crew members instead of 14 passengers recommended to operators in order to ensure social distancing.
Oke-Osanyintolu said search and rescue operations have concluded with the rescue/recovery of all persons on board the boat.
“Search and rescue operations, alongside the LASWA dive team commenced under extremely challenging nightfall conditions and have been concluded as at today, Sunday July 5.
“Final tally revealed a total of 21 passengers and two crew members were aboard the capsized vessel. A total of 16 were rescued alive while seven females were recovered dead.
“Members of the public are reminded to abide by the safety regulations of the state, including appropriate usage of life jackets and restrictions on timing and plying of the waterways,” he said.