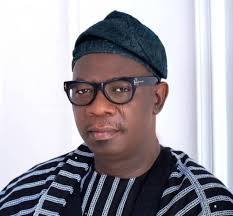 Deputy Governor of Ondo state, Agbola Ajayi, has urged Rotimi Akeredolu, the Governor, who went into isolation since Tuesday last week, when he tested positive for COVID-19, to hand over to him.
Recall that Akeredolu and Ajayi have been having a running battle, which reached its height when the deputy governor resigned his membership of the All Progressives Congress, APC and joined the Peoples Democratic Party, PDP.
The governor had fired all the aides attached to Ajayi’s office and his police escort was withdrawn until Mohammed Adamu, Inspector-General of Police, IGP intervened.
While announcing that he would be going into isolation, the governor appealed to the people to keep safe and observe the safety protocols of the Nigeria Centre for Disease Control, NCDC but failed to hand over power to his deputy.
Later, the governor, through the state Commissioner for Information, Donald Ojogo, on Friday, said the governor would not hand over to Ajayi, who had left the All Progressives Congress.
“Handing over the governance of the state to Agboola is a non-issue and we are not even considering that. I know as a matter of fact that nobody would want to do that.
“The deputy governor has created an unusual scenario upon which he wanted to climb into the next step in his political ambition and we have seen this as a misadventure.
“We cannot toil with what we have built over the years. We cannot risk and attempt to hand over to someone who has exhibited the widest scenario of betrayal. So, it is unthinkable,” he said.
Reacting through his media aide, Mr Allen Sowore, on Saturday, Ajayi stated that he had been praying for the quick recovery of the governor but the constitution had to be followed.
Ajayi said he ought to be the acting governor since Akeredolu has been partially incapacitated, saying the refusal of the governor to allow him take charge of the state amounts to a “flagrant disregard for the country’s constitution”.
“Section 190 (2) of the 1999 Constitution of the Federal Republic of Nigeria (as amended) is apposite in the prevailing constitutional abberration in Ondo State,” Ajayi said in a statement Allen Sowore, his spokesman, issued on his behalf.
“However, it should be noted, that Mr Governor is at liberty to handover or not within 21 days after which the constitution becomes operational.
“Ostensibly, the refusal and failure of Mr Governor to handover the running of government to his deputy while he is temporarily incapacitated in self-isolation underscore his absolute disregard for our nation’s supreme document, 1999 Constitution (as amended) as well as the tenets of rule of law.
“The Governor’s position is a spite on the Ondo State people and a direct assault on the provisions of the constitution which he swore to uphold.
“Governor Akeredolu’s deliberate mounting of obstacles to smooth running of government machinery while he’s in self isolation as a result of the fact that he has been tested positive for the COVID-19 privileges the hypocratical nature of Ondo State government’s war against the ravaging pandemic.”