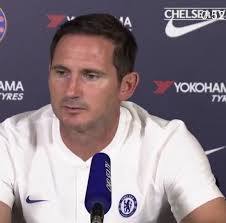 Chelsea manager Frank Lampard has lamented his team’s inconsistency after suffering a shock 2-3 loss at West Ham in the Premier League.
The loss at London Stadium opened the door for rivals Manchester United and Wolves.
The result left Chelsea just two points clear of in-form United and Wolves in fourth position – the final Champions League spot – with six matches remaining.
Lampard vented his frustration afterwards in an interview with Sky Sports.
“It’s the story of our season,” Lampard told Sky Sports. “It’s been a good season but there have been so many of these moments. We had an opportunity today to go through but you have to do every part of the game to get results.
“If you switch off or make one or two errors then you will encourage teams. Players have to show an extra mentality to get through these games.
“I get to see this group closely and I’ve seen us play great games then have moments where there’s the opportunity to capitalise and that’s the difference at the moment. We have work to do.
“There’s without a doubt a good group of players in there but then when you analyse the consistency, you feel a game like this is coming. Again, that shows there’s work to do.
“If we are opening up to try and score that winning goal then we have to be prepared to run back the other way and defend. And defend better.
“We are two points ahead of Manchester United, who have been playing fantastic and are on a great run, Wolves are having a great season and they’re behind us, Leicester have had a great season and we’re just behind them.
“It’s about perspective. We are upset because we wanted to win the game, we’re footballers and we’re in a good position. So there’s no point in being down but I can’t help but say the truth today which is that it’s a game we should have won tonight.”
Chelsea could have shared the spoils with the Hammers on Wednesday.
But they were undone by Andriy Yarmolenko, who came off the bench and scored the 89th-minute winner.
Brazilian Willian had netted a brace.The first goal was a via a 42nd minute penalty that put Chelsea ahead.
But three minutes after, West Ham equalised via Tomas Soucek.
Then six minutes into the second half Michail Antonio gave the hosts a goal advantage.
It took Willian’s sublime free kick in the 72nd minute to restore parity.
But Yarmolenko’s last-gasp goal took the game away.
It lifted West Ham three points above the relegation zone.
The goal also ended Chelsea’s six-game unbeaten streak in all competitions.